9 Reasons Idols Are So Attractive…

When you travel to Nepal, you don’t have to go far before you see an idol somewhere. If you want to visit some tourist sites in Kathmandu, pretty much all of the main options are Hindu or Buddhist temples containing enormous collections of idols displayed around buildings. Yet personally, I don’t struggle with a secret temptation to buy one, and slip it into my suitcase. It’s not even on my radar. 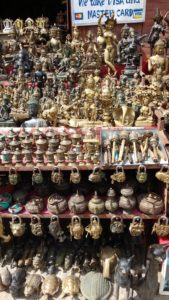 When you read the Old Testament, you also see idols everywhere. Constantly the Israelites kept on getting seduced back into worshipping idols instead of remaining faithful to the God of Israel. Have you ever wondered what the big temptation of idolatry was? I don’t wander around Australia wrestling with the temptation to buy a new idol for my lounge room. What was the attraction of idols for Israelites? This is a great question to consider because it reveals how we are subtly being seduced into functional idolatry in the modern world all the time as well.

2. Idolatry was a part of your calendar. Following further from #1, idolatry involved following rituals and celebrations during the year. If you tell everybody you don’t celebrate or watch the Melbourne Cup, you can be perceived to be a bit of a party pooper. Far easier just to enjoy the celebrations and carry out the actions mindlessly with the crowd.

3. Idolatry was a ritual in your lifestyle. After a while, you just made an offering to your favourite idol and you didn’t even think about it. When you get into a routine you just do things. You come home from work, you switch the telly on, or maybe you check your facebook account. You just do these things without thinking. Back in those days, worshipping your idols just became part of your daily routine. It was just what people were in the habit of doing.

5. Idolatry had your commitment. The gods demanded financial investment. It was costly and sacrificial. When you invest in something financially- it strengthens your resolve. It changes you psychologically, and you begin to look for reasons to justify your investment. You’re not going to be talked out of it overnight.

7. Idolatry was very open-minded. It was convenient- you could worship anywhere, not like the Israelite God where you could only offer sacrifices at the temple. There were many gods to choose from and many types of worship to try. Why be narrow minded and exclusive in worship, judging others who liked to do things differently?

8. Idolatry was very indulgent. The gods were often very aesthetically pleasing in appearance. Furthermore, when idolatry got firmly entrenched there were sex gods to be appeased through temple prostitutes. Idolatry was an act of defiant self-indulgence.

9. Idolatry was demonically inspired. Of course, the biggest reason for the appeal of idols is a spiritual one. There are demons in the spiritual world behind the little statues which are calling for our devotion and allegiance instead of to the true God of Heaven.

Today those demonic forces are still at work in every culture, seeking to seduce us away from the worship of the true God into a lifestyle of functional idolatry. Thankfully, God has defeated these false gods once and for all, in the death and resurrection of Jesus Christ. Let’s keep our eyes on Him, and be aware of all the many ways we are being seduced in our affection elsewhere from an undivided heart for Christ!