Christian commitment is the inevitable response of our gratitude toward God. Radical commitment gives full expression to that same gratitude, irrespective of the geographical and circumstantial extremities to which such expressed appreciation may lead. 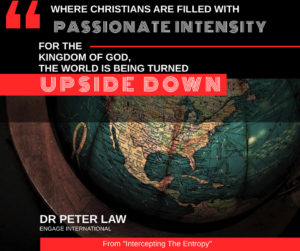 William Butler Yeats wrote a poem entitled The Second Coming (quoted by Yale University Law professor Judge Robert Bork in his book Slouching Towards Gomorrah) alluding to the times in which he lived as being a period when “The best lack all convictions, while the worst are full of passionate intensity.“1 What an accurate depiction of our day! I see that exhibited all over the world: a passionate intensity for the causes of men – political, environmental, philosophical and ideological; human fervor of an extraordinary caliber, defying explanation, yet possessing no lasting, eternal dimension. However, where Christians are the ones filled with passionate intensity for the kingdom of God, the world is being turned upside down!

Christians in the Middle East, Northern Africa and Asia endure persecution daily on a scale unknown to most of us in the western world. Paul Marshall, in his book Their Blood Cries Out describes some of these Christians in this way: “They are Indian untouchables clearing-up excrement from the streets; they are slaves in Sudanese markets; they are Russian Orthodox priests, hit by cars which mysteriously careen onto the sidewalk; they are Arab women who have been raped and had acid poured on them to remove distinguishing Christians marks; and overwhelmingly, they are people who, given a moment’s time, space and freedom, live a life with joy, enthusiasm and gratitude.”2  These believers, whose allegiance is to Christ, know the meaning and cost of radical, kingdom commitment.

God is looking for people who are passionate for the kingdom – those willing to take the risks involved in stepping out into the line of fire. Do you believe God has the power to keep you and to defend you on the front lines? There is no guarantee that you won’t face physical loss. In the famous passage on faith found in Hebrews chapter 11, many experienced the miraculous protection of God against all kinds of physical and spiritual challenges. Others suffered incredibly, while some lost their lives! Radical commitment is just that radical. Serving Christ and His mission in this thrilling time of history promises the greatest kingdom adventure. But it could cost you your life!

Steve Saint, son of the martyred missionary Nate Saint, often hears the comment from Christians that God allowed events, which took his father’s life and that of Jim Elliot, Roger Youderian, Ed McCully and Pete Fleming on “Palm Beach”, a river’s-edge clearing in the Amazon jungle of Equador. His response is definitive: “No, God didn’t simply allow it. He planned it!” 3. And as a result, the Waodani tribe (known then as the Auca Indians, Auca being a pejorative term meaning “those big killers”) and peoples of the Ecuadorian rainforest, heard the gospel, the Church was built, and His kingdom established. The purpose of missions was being fulfilled – taking the gospel to the ends of the earth, planting the church where none exists and nurturing it until it too begins to plant other churches, all to the glory of God. Martyrdom is not the worst thing that can happen in the experience of the church. Apathy may well be. 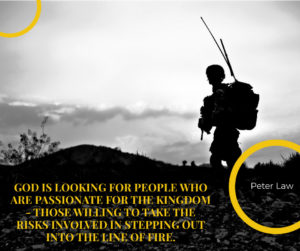 The Church of Jesus Christ and individual Christians, who constitute the Church, remain perpetually in the menacing crosshairs of Satan’s insidious malevolence. Part of his malicious purpose is to lull us into a state of spiritual lassitude, in which we sit idle for the kingdom. A vital, engaged, God-worshipping, mission-focused, kingdom-oriented Church however, offers the greatest threat to satanic agendas in the world, wielding a fierce God-given potential to thwart his every evil intent.  So if the sleeping church is awakened; if we dare to become the church God has in mind – giving ourselves to the expansion of the kingdom and the building of His church around the world – we will find ourselves on the front lines of a kingdom advance. And there, we will witness the most impressive workings of God in the lives of men and women in a broken world, bringing His healing and reconciliation as they are restored to His majestic rule and reign as King.

An excerpt from A Kingdom Call to the Nations: Passionately Invested in the Great Commission