Is Multiplication Growth For Real?

Every now and then, we hear incredible stories of the growth of the church in places like China, India, Africa or Brazil.

Statistics vary, and sometimes it is difficult to know how accurate all the stories of growth are, but there is no doubt that incredible stories of multiplication are emerging from these places.

For example, the church in China, on current projections is on track to become the biggest Christian population in the world by 2030.

Stories emerge of viral multiplication- a theme we love in the modern digital world where ideas and stories spread uncontrollably through social media. Alan Hirsch tells the process of one church planting movement in China in which all new Christians are commissioned to be church planters upon their conversion.

To those with an optimistic outlook, these stories sound like incredibly good news. To those who are perhaps a little more battle hardened by the toughness of ministry in the west where growth often seems so frustratingly slow, it is easy for many questions to emerge. Just how real is this growth? Is there a theological depth to match the numerical growth? Are these stories of rapid multiplication leading to the establishment of healthy Christians and churches in the long term?

The great privilege of having an involvement in the ministry in Nepal is that there is a similar multiplication movement in the church underway in Nepal, and you get to see glimpses of it firsthand. Statistics are again difficult to be confident about, but there is every indication to suggest that the church is growing at quite a stunning rate. One study compiled figures for the population of Christians in all 75 districts of the country, and found that there had been a growth rate from 2001 to 2011 of 268%. 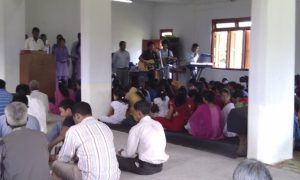 Travelling personally in Nepal, there were many anecdotal stories of such growth to observe. Just down the road from our Engage Training Centre was another unrelated church, who I was casually told had planted 15 new churches in the previous 7 years. The growth that I observed almost always seemed very simple and outwardly unspectacular- simply one family at a time turning to place their faith in Christ, but clearly across the nation this is occurring at a very encouraging rate.

The Danger of False Christianity

Where there is such rapid growth, there is clearly the danger of false doctrine and a shallow superficial Christianity growing alongside it. This is one of the priorities of Engage in seeking to provide the church leaders we train with some strong doctrinal foundations in our training program. But in spite of the ever present danger of false Christianity, we should indeed be encouraged by such growth, and pursue it intentionally.